This is a hard one to write, but here we go…  I kicked off the triathlon season this year by competing against elites in the Olympic distance Elkhart Lake triathlon – my first time at this race.  I was hoping to do really well and finish in the top 5 for elite females.  I was also hoping to be in contention for the fastest bike split.  I guess I was hoping for a lot of things.  Too many things.

To make it short and simple: it was AWFUL.  My worst race ever.  This wasn’t even about placement or my competitors.  This was about my personal performance – an absolute embarrassment.  This is when you want to slink into a hole and wish it never happened.  This is when you question if it’s all worth it, when you want to hide in shame, and you ask yourself, “What the hell happened?!” 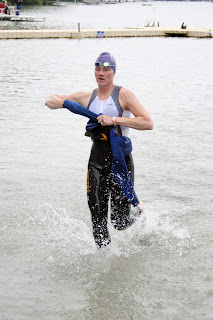 There were 11 female elites at the start of the swim.  It was a cool, overcast morning, but the water was the cleanest, clearest water I’ve ever raced in.  The other women took off like lightning, and I figured many of them were most likely former swimmers.  Coming out of the water, I actually was very near what I expected for my time.  The results have the swim time a bit long, as it included the exit as well, and since it was quite a jaunt to transition, I stripped off my wetsuit shortly after I exited the swim, and perhaps even before I crossed the timing mat.  It made it easier to strip and run like that though.  Most of the women beat me out of the water.
I got out on the bike, and it felt like it wasn’t long until the struggle started.  I tried to be patient with my average speed, expecting it to increase as I got further into the ride, as there was some super sharp turns that we had to substantially slow down for.  I was warned about the hills.  I underestimated the reality of them.  Every good downhill had a turn at the bottom it seemed, and there was at least one hill so steep that I thought I might be faster walking it.  I stood up on the bike instead to get up it – something I’ve never done before.  I was no longer able to hit my watts, and on the return route of the course, I watched my average speed keep dropping – right along with my self-confidence. 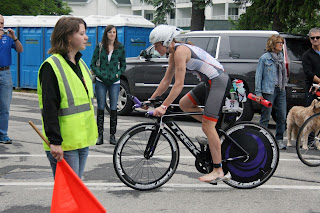 In T2 I fought with cramping toes as I put my shoes on and was told I was in the top 10 for women.  It was confirmed – this was bad indeed.  I felt incredibly slow on the run, as I encountered one steep hill after another, and I continued to unravel.  A spry woman passed me.  I shuffled along.  Speed walking the hills may have been just as fast.  My goal pace was around 7:10 – something I knew that would be tough, but it should have been not that far-fetched.  I averaged 7:51.  I wanted to cry. 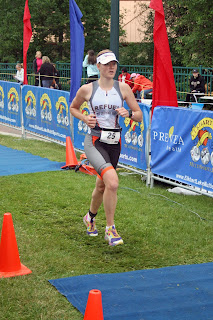 I experienced greater self-defeat in that race than I ever have before in triathlon.  I’ve biked up a bluff, into strong winds, ran up High Cliff and over ankle-rolling terrain.  I’ve run through heat so fierce that the air around me was stifling and you could see the heat rise from the pavement on the exposed “desert” run course.  I’ve even competed on a day where it hit a high of maybe 40 degrees (don’t forget I was wet from a swim for it!).  But I have never felt so defeated as I did that day at Elkhart Lake.  No matter how much I’ve struggled on some of those other courses, I have never fallen apart like this before.
This wasn’t about me having a baby 3 months prior.  I have no excuse.  Maybe the hills burned my legs out.  Maybe a lot of things.  I don’t think it would be just one thing either.  I don’t know what exactly happened. But what I do know is that I’m capable of far better.  I know my training shows that I am capable of much, much more.  I know that after taking a few days to refocus, I have a lot of tough workouts ahead of me.  I cannot let that one race define me.  I also know that I will be looking for redemption.
Posted by Jayme Wyss at 9:42 PM