It’s the final countdown to the season kicking off with my first triathlon of the season.  I’ve spent days, weeks, and months getting ready for this.  I’ve also had an awesome upgrade in gear (aka my fabulous new bike), and we’ve been busy working on getting it ready for the season too!  I immediately fell in love with the new ride - its sleek design and noticeable speed.  The new bike was originally black with red, silver, and white accents.  I wasn’t crazy about the red, but the Trek’s Project One customization would substantially increase the cost and make it outside my budget.
Andy and I decided to do some customization on our own.  Mel’s TradingPost switched the bar tape from black to purple for me.  Then we took the bike into the Fab Lab at the Three Lakes High School to cut vinyl for it.  Andy had the shapes already figured out, as well as a couple other designs we were going to add.  We covered all of the red accent shapes on the bike with purple, and added a “W” to my box in the back.  I also got new disc covers for Christmas, so we put a design on them as well.  Mel’s Trading Post installed the disc covers and made sure it was race ready.
It’s going to be a challenging race this weekend as I’ll be going up against a strong field of elite women.  It’s time to shut down any negativity.  Getting sick and having Myles back to getting up multiple times a night during race week isn’t ideal.  It’s also not the end of the world.  And tough competition is good for me.  I know I’ll have to dig deep.  It’s time to see what I can do! 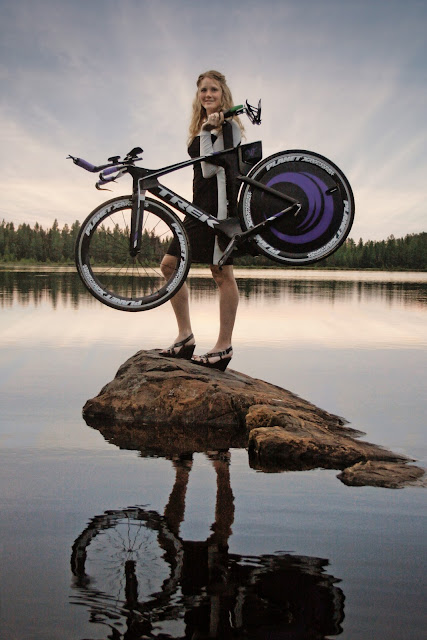