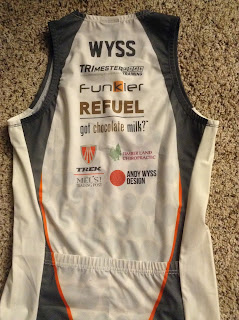 My first sponsor was Draft Cyclery – a start-up company that carried Funkier cycling and triathlon apparel.  I met one of the owners at the first duathlon that I won, and so began a sweet relationship.  That owner has actually become the Director of Funkier USA, which also resulted in Draft Cyclery closing up.  Fortunately, I was invited along for the ride!  To be honest, I’d be a bit nervous about switching to a different brand!
I’m a part of a Women for Tri Facebook group, which has over 6,000 women worldwide.  The BIGGEST complaint that I read over and over regarding race kits is having the tops of 2-pieces ride up. I’ve worn different tops that rode up, and I know that it is incredibly annoying.  I’ve also seen plenty of triathletes with a nice sunburn on their lower back from jerseys and kits riding up on the bike.  Don’t be one of those people.
The two-piece kit seems more popular for a couple of reasons.  First, they are typically more stylish than a one-piece.  Second, a pit stop during a long race is much easier to do in a two-piece.  I also prefer a two-piece for both of the above reasons.  Also, I feel they are more comfortable personally as I am taller and then I have more room.  Onesies won’t ride up though. 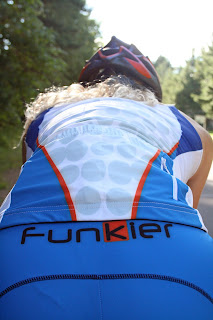 Don’t just order a bigger size top hoping that it will be longer or stay down, as you want it tight without extra drag.  So what is the solution for those tops riding up?  Elastic along the bottom always rides up to the narrowest part of your waist.  Some brands may make their tops a little longer.  I’ve heard one makes it with snaps to hold in place, and I’ve read LOTS of recommendations of sewing your own snaps or velcro into race kits.  Let me address this.  Snaps – who wants to be fumbling with them on those pit stops you thought you needed a two-piece for? And Velcro?!  Let’s not damage the material of our pricey kits by putting on something that can snag and ruin it.
Best solution?  Grippers!  Funkier cycling and triathlon apparel has a gripper along the bottom hem of all of their tops – triathlon kits and jerseys (summer AND winter jerseys).  I have never had to worry about my tops riding up.  The LAST thing you want to worry about when you’re racing is what you are wearing and if it is staying in place!
Too many manufacturers think that in order to make something for women, they need to make it pink and put flowers on it.  Some women want that, but there’s also a lot that don’t.  What I love about my Funkier race kits is that they are different than what I see everyone else wearing, and they have bright colors.  So wear something fun.  Wear something FUNKIER!
Posted by Jayme Wyss at 2:23 PM