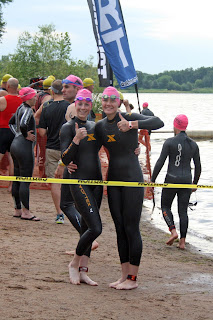 This was my first sprint triathlon since 2012!  I was so excited for this and SUPER happy not to be doing the half-iron distance.  Plus, I got to race with Katherine again!  The bike was 22 miles, and I hoped for under an hour, but the main goal was to have the 5K run be under 22 minutes.  I needed some confidence going into Nationals, and I’ve been focusing on run speed for the past 2 weeks.  I hoped my overall time would be just under 1:30.
We debated over wearing wetsuits.  The water temperature was HOT (77 degrees – just one degree shy of being wetsuit illegal).  The distance was only a quarter mile (time saved versus time lost stripping), the lake was SUPER weedy, and we had BIG waves of 100 people.  I wore the wetsuit, which was great while in the water and being clobbered by a mob of people, and it was a barrier between me and the weeds at least a little bit, but the stripping added a lot of time to my swim (I exited the water under 7 minutes, stripped and ran up the hill to T1, which tacked on another minute).  As a result, I did have a fast T1 time though.  I’ve come to like the Olympic distance swim more, as this was almost too short! 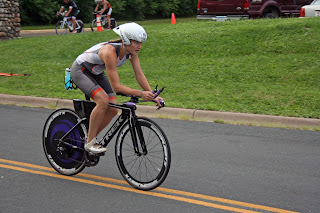 The bike course was fast with just a few rolling hills.  My only complaint was that there was TON of blatantly obvious drafting!  While there were officials on the course, they didn’t seem to be penalizing anyone.  The pack that caught up to me, rode near me for a long stretch before pulling ahead, actually had an official ride next to them for a while, and they still didn’t break formation.  Frustrating.  I averaged around 22.5mph.  It was a good bike split and typical of last year, but my watts were way lower.  I tried to remind myself that today was more about the run and less about the bike.  But how’d I get a fast split?  Well, it was a fast course, but I also have to give my super fast TREK and a more efficient fit a lot of credit here!  It’s been saving me this year!  Drives me a bit nuts though to think about how much faster I SHOULD be going if I could get back to where I was pre-season or even last year.  It was a fun ride and a good distance though (way better than 56 miles at this point!).  I rode in at 57:34 – yessss. 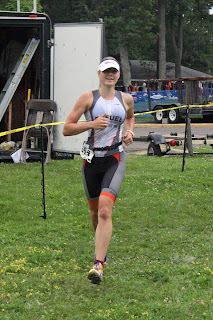 I ran out of T2 at approximately 1:07:30 of the race.  If I ran under 22 minutes, I would also be under 1:30.  “Drive, drive, drive,” I told myself.  I didn’t have a GPS watch, and I missed Mile Marker 1 to check my pace.  I recognized several faces of the women ahead of me as they ran back.  It was a wicked fast field of competition, with a pro in the lead, and the next 5 being some of Minnesota’s most successful elite amateurs.  I was definitely in good company.  Katherine was only 2 women back from me and was killing it at this race!  I finished in 9th with a time of 1:30:03, just missing being under 1:30, and my run was 22:29 – drats!  There weren’t very fast 5K times overall though, so I’m hopeful the course was a tad long ;)
I may not be where I need to be yet, but at least I’m getting closer!  I have two weeks until Nationals to put things together.  Why is Nationals so important?  That’s the qualifying race for Team USA that will compete at the World Championships in Cozumel, Mexico in 2016.  The top 18 in each age group qualifies, and I was 17th last year with a good race.  World’s is World’s – that’s the be-all and end-all, and I’ll have 6 weeks to focus on that after Nationals.  While World’s is the BIG one, Nationals is the important one to focus on right now.
Posted by Jayme Wyss at 2:03 PM