I adjusted my goals and expectations for this triathlon due to the fact that I am severely sleep deprived and it has been affecting my training immensely.  Myles has continued to get up several times a night every night for the past month now.  So not only am I short on sleep, but it is broken, poor-quality sleep as well.  The fun thing about this race was that I got to do it with one of my best friends, Katherine, and another friend, Maria, did the sprint (we did the Olympic distance).
It was a hot day and above 70 degrees when we started with humidity thick in the air.  It was a fast swim start, and I was able to draft for a bit early on.  Unfortunately, I didn’t stay with them when the lead group pulled away.  I cut my time from my Elkhart Lake swim.  My watch read 24:33 when I stood up on the ramp to exit the water, putting me under 25 minutes by time I got out, which is a good swim time for me.  I was also the 3rd female out of the water.
I was conservative with my watts for the first loop of the 2-loop bike course, hoping to be able to pick it up for the 2nd half if I could.  I had to keep reminding myself that my expectations needed to be adjusted and that I was doing okay with where I was at.  The first 6 miles was FAST (averaging at least 23.5mph), so I knew I would run into a head wind on the second half.  I was right.  It was a nice, fast course, but wind was definitely came into play.  I looked forward to the first half of the second loop, maintained my watts, and averaged around 22mph, which was also good enough to give me the top bike split for females (something I always want). 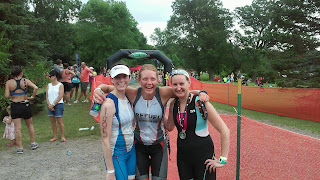 The first mile of the run was trail – dirt and grass.  It also had a short, steep hill.  Once we got out onto the road, we encountered long hills to tackle.  At the turn-around for the 10K, I was in the lead, but my pace was incredibly slow.  A woman was gaining ground fast and soon passed me.  I counted 2 others who looked better than I felt and then saw Katherine in fifth!  I somehow managed to hold my position, only to later find out that the 2 women directly behind me had a later wave start and their times beat me.  I ended up 4th overall, and Katherine was 5th.  Just how slow was that 10K?  Last year I considered a slow 10K to be anything over 44 minutes.  At Graniteman, my 10K was over 49 minutes!  That’s FIVE minutes slower!  I also lost to the 1st place woman by 5 minutes.  Instead of duking it out with her at the finish, I was struggling to survive the run.  I’ve got a lot of work to do, but first, let me take a nap.
Posted by Jayme Wyss at 5:50 PM