This past weekend, Andy and I participated in our hometown’s annual Fast Break 5K.  It’s a low-key, fun race.  Last year, I was the top female finisher, and Andy was a close second for men.  My training plan and the training opportunities that I had prior to the week meant that I would train through the race, so I knew not to be disappointed too much if I didn’t get the time that I would like.  It would still serve as an excellent run speed session though.
Myles also also been a terrible sleeper lately as well.  Around 2 months, he started sleeping through the night, or he would every other night.  Then he reverted to getting up a couple times a night the week of Elkhart Lake.  Recently he has been getting up 3-4 (or more) times a night though.  And it has definitely taken a very noticeable toll on me.  I’ve always valued sleep, but it has really shown just how big of an effect that lack of sleep can have on you mentally, physically, and emotionally.  I’m REALLY hoping things improve VERY soon! 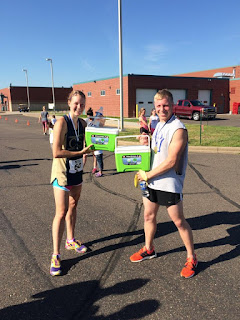 Saturday morning was already hot and sticky with zero breeze at race time.  Andy and I both ran by feel and left the GPS watch behind – not wanting to become fixated on it, or frustrated with ourselves.  I’ve said it before, and I’ll say it again: don’t belittle the 5K.  It’s a very tough race.  Respect it.  Andy had a close second place again and I pulled off another win.  With less than a mile to go, a woman actually passed me and I didn’t know if I could do it.  I’ve got to start chasing the doubts away, dig deep, and just lay it all out there.  Then no matter what happens, I’ll at least know that I did my best with whatever I had that day.
Posted by Jayme Wyss at 2:56 PM