Expectations: A & B Goals

I think what I’ve really loved about getting into triathlon, is how al of my early-on goals were crushed.  From the first race to the first full season of sprints, and the next season of Olympic-distance, and then a season of half-iron distance, I kept surpassing my goals.  The self-affirmation feeling was addicting.  I was faster than I thought, and better than I thought I could be.  “Whoa…look what I could do!”  Then came 2014, and then 2015… I wasn’t meeting goals and became increasingly frustrated and disappointed.  The thought of “retiring from triathlon” has been mulled over.  Feeling like a PR in anything was out of reach.  Maybe that’s where the fun in it was lost.
It’s not just races either.  It’s also the daily grind of workouts.  Not hitting old swim times, or watts on the bike, or paces on the run.  What was once a source of self-affirmation now is self-defeat.  And the emphasis of both is SELF.  It’s self-inflicted.  It’s all in my head.  And there is a whole lot of self-doubts that like to hang out in the back of my mind. 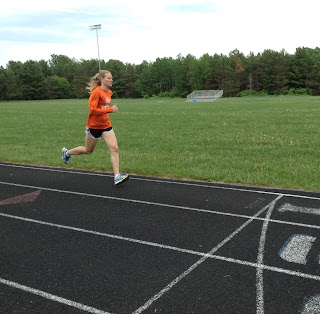 Last week, I did a couple time trials on the track.  I didn’t change my workouts or make sure I was rested or fresh.  I was in the final hard push before race week and I knew it wasn’t worth jeopardizing that.  So Monday I swam hard 200’s, then biked 40’ @ 90% threshold, then ran an 800m at practice.  My goal was to at least break 3 minutes (B goal, and talk about self-doubt my PR is 2:46 from during my fast post-Baya year), and my A goal was 2:50.  It hurt like a son of a gun but I hit 2:46.  Self-affirmation outweighed the pain.  I hadn’t felt like anything but a failure in a long time.  So Wednesday I swam sprints, did my bike workout, and then ran a timed mile.  My one-time PR of 5:59 was my A goal, under 6:10 was my B goal.  I finished in 6:04.  If I had fresh legs, I think I could break 6 minutes again.  I’m excited about the results.
A and B goals.  Aha moment.  I’ve been too black and white lately.  I’ve had my goal time/effort, and then when I haven’t hit it, it’s led to frustration and disappointment, and ultimately, wanting to quit.  I used to always have A and B goals, or what I would call “realistic” (B) and “ideal” (A) goals.  While it feels like lowering expectations should be the wrong move, it’s really a shift in mindset.  Success isn’t black and white.  For my first half-iron distance race, my realistic goal was 5:30, and I thought 5:15 was an attainable goal, and my “someday” goal was breaking 5 hours.  I finished in 4:58.  It would have been a less enjoyable process if my only goal was to go sub-5.  Surpassing expectations is where you discover a lot of excitement and joy.  Two years ago I was stressing over the Green Bay triathlon.  Would I repeat at the top?  I decided to focus on FUN first.  I ended up winning by over 16 minutes, and breaking my previous course record time, even though the bike and run had gotten longer.  So give yourself a range.  Give yourself a break!  I know I will.
Posted by Jayme Wyss at 7:49 PM