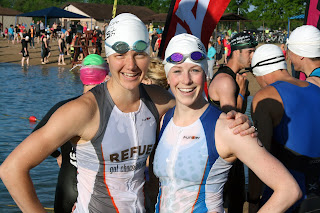 We lucked out with great weather – it was warm, sunny, and a bit windy but not terrible.  I skipped the wetsuit this year since it was such a short and warm swim, and I figured any time I’d save with it would end up costing me in time taking it off anyway.  I did a ton more dolphin-diving than what I even remembered and the swim went by so fast!  I hit the beach in 4:58 for the 400 yards (1:15/100 yards), and ran the beach to T1.  I put on my helmet and grabbed my bike.
The flying mount was smooth without any refresher practice.  I struggled to keep my watts up where I wanted to on the early part of the ride though, and the headwind was more intense than I thought it’d be.  Almost half way done with the ride and my bike computer said I was averaging 19.6mph!  (Which was nowhere near my goal of 22mph).  The second half was so much faster and by time I dismounted, my ride averaged 21.7mph.  I was much happier with that.  I couldn’t believe how many women I had to pass out on the bike though. 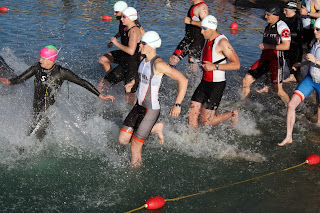 I was fairly confident before the race regarding my run, but when I got out there, the 5K seemed much too far.  Men flew past me early on until I was able to start picking it up a little and then I was able to keep better pace.  On the return, I saw Katherine gaining ground on me. I figured a woman would catch me (I was going SO slow!), but I was glad to see it was Katherine.  With so far yet to go on the run, I debated trying to just beat her, or “letting” her catch me and finishing it together.  I thought we were first and second.  Fortunately, I decided to kick it hard for the very final stretch and cruised in for an overall decent race (despite my pathetic 5K split that should have been 2 minutes faster – yikes!).  Katherine finished close behind.
Unbeknownst to us, two women about 5 waves behind us were cruising in to take 1st and 3rd place, and I ended up getting beat by about a minute.  Good thing I kicked at the end though, because I beat the other girl by only 1 second! 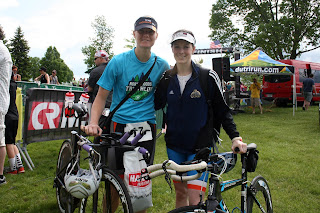 The biggest goal of this race was to have Katherine qualify for USAT Olympic-distance Nationals and since she won her age group, she did it!  At this rate my run won’t get me close to podium at Nationals, but two upsides: I have a generous 2 months to turn that around and Katherine will be in Omaha racing with me!  By the way, major props to her, as she is only 4 months post-partum from her second baby!
Posted by Jayme Wyss at 10:18 PM