Badger State Track was hosted in Wausau this year (typically it is in La Crosse), and while the forecast kept showing rain, and Andy had done nothing prior to the week leading up to it, we were set on going. We both picked 4 events and kept pretty busy. Not sure if I have had really bad allergies, or a very bad cold, but I have been miserable and not getting much sleep. Why not go compete in the rain?!

The day started overcast and misting. We had a headwind(!) in pole vault, but were told that moving the pits was not an option. Fortunately it was calm at times, and we were allowed to wait for the wind if we needed to (definitely waited it out a couple times). I squeezed in my warm-up and ran over to discus to get warmed up and to throw. I have been working on disc quite a bit lately, and the All-American standard for female sub-masters was over 88 feet. My PR the weekend prior was 84-2. I threw 94’ for a 10’ improvement and I smashed the standard! Getting close to 100’ makes me feel a bit more legit throwing the disc!
I got back over to pole vault for run throughs to start at 10-6, and I was already the only female remaining in the competition (the next best height was 8’). After making 10-6 and 11, it took me a couple attempts to make 11-6 (which I have now made 3 times this year)!! Since I was the only female remaining, I chose to go for 11-9 first. My college PR is 11-10, and post-college best is 11-6. There was definitely some bar love but I cleared it!! I got a lot of height on one 12’ attempt, but not enough depth. To be honest, most of my vaults with the bar up felt like junk! While I am frustrated that I am not putting things together better with a full approach at a meet, I am also a bit impressed that I have been making the heights with such poor jumps. I have 4 more meets this summer to put it together to make my 12’ goal!

I had probably one of my worst throws over at shot, but fortunately I also had my best throw, with a new PR of 29-10 (so close to breaking 30’)! After achieving 3 new personal bests, I felt like I HAD to PR in the 800 as well. My official PR time for the 800 was a 2:46, although I unofficially ran a 2:43 in the Coach’s Race at our home meet this spring. I was seeded with the youth, and they didn’t fail in helping push me and I dropped my time to a 2:39.96!
Andy also had a fantastic day, and his “philosophy of zero training” seemed to have worked again for him, as he triple jumped over 40’ and broke 19’ in the long jump! On top of all that, the clouds disappeared and the sun came out and it ended up being an all-around great day. We had a few other Three Eagle Track Club members competing at the meet as well, which always makes it more fun when you can compete with your team! 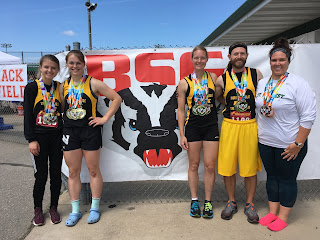 My personal theory is that when the odds are not in your favor, that’s when you can really shine. My best jumps in college were like that. I sprained my jumping ankle the week of indoor conference. At conference, with a ton of tape on it, I vaulted my indoor record of 11-8. On a crazy windy day at Hamline (I should include that I am a headcase when it comes to wind!), I vaulted 11-10 for my ourdoor record. The wind that day was constantly shifting. Sometimes a tail wind, sometimes cross, and even sometimes a head wind. In those situations, I take the pressure off of myself to perform.  If it doesn’t go well? Well, there’s an external factor to blame (ha!). Either way, it’s about having fun and not letting outside factors get the best of you. My motto this year seems to truly be: “it’s about overcoming- not about having all the stars align.”
Posted by Jayme Wyss at 3:34 PM