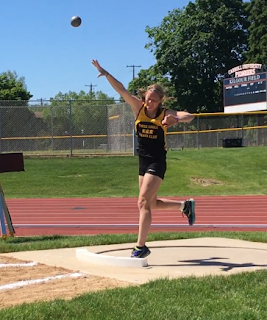 What an experience! Ten events over two days. The first day did not have any of my strengths, and these ladies were amazing athletes! I had no expectations for the 100. Long jump was definitely not my best, only jumping 13-5. I was hoping for closer to 14 feet. When you don’t do well in one event though, you just move on to the next, and that’s exactly what I did! My best throw of shot was in college, somewhere in the 29’s. Last time I threw at a meet though, I don’t think I hit 28. I threw 29-4.75! I have always struggled with high jump. I jumped 4-6 ONCE in high school, and while I understand HOW to do the event, I have a hard time converting horizontal speed to vertical height. That would be true of all jumping events, including pole vault. This high jump bar was VERY forgiving though, so I managed to make 4-4! I have had close attempts in practice at that height (with better form), but a slight brush of our bar would make it fall. My goal for the 400m run was to go under 1:15, and I came in at 1:12!
Results that surpassed my expectations for most events helped to make it a successful day, but I won’t lie, I definitely felt out of place with some of these ladies. One had a lifetime PR in shot of 55’! Another had a lifetime PR of 14’ in pole vault, and while one woman in her 50’s just started competing in track a few years ago, she definitely kicked my butt in high jump. And there was a well-rounded college superstar multi-eventer/pole vaulter. Day one was a reminder of my high school days, where I was mediocre at best in everything. It was also an honor to meet and compete with these awesome women though!

The second day I was really excited for, but also tried to hamper my expectations a bit since I was a bit sore from the first day. However, I know that more than anything, I have endurance, and I am also used to doing track events as my second workout of the day, meaning that I am used to jumping or pole vaulting on tired legs. I started with my first-ever 100m hurdle race, and while it wasn’t fast, I met my goal of 4 stepping all 10 hurdles. Next time, I will definitely shoot for a faster time! I actually had enough fun with hurdles that I would like to stick with it a little bit for fun. I was looking forward to discus, since I had been practicing it quite a bit the last few weeks, and even worked on the rotation instead of just power throwing. My best in high school, if I recall correctly, was around 77’. My first was my best with 84-2! The other two throws were also over 82, so I was very happy with how that turned out. We got about a half hour between events (and to use as warm-up for the next event), so I hustled over to pole vault to get in a good warm up. After a good warm-up, three of us (the only ones who vaulted in college) had to wait more than an hour (1.5 hours actually), to even get to our starting height. We got one run through to re-warm up, and while my first make was ugly, it still got the job done. Made 3.10 meters (10-2 roughly), passed to 3.30 meters (10-10 ish) for a make, cleared 3.40 and then 3.50m (11-5.75)! I had attempts at 3.60 (one cm shy of my lifetime PR), but failed to clear it. What a great showing in my best event after 7 other events!

I held a javelin for the first time at the end of the first day of competition, and did not have much for confidence with that, so all I will say about that is that I got a mark and I have lots of room for improvement on that event! The decathlon concludes with a 1500m run. At that point, one woman had already acquired enough points to set a new W40 American Record for the decathlon, but another woman was very close to setting a new W50 AR as well – if she could run a fast enough time in the 1500 to get her enough points. My legs were pretty beat at that point, but I told her I could pace her well, so she shouldn’t let too big of a gap come between us. I was hoping for at least 5:50 or under. The college athlete pulled away for a big gap between us after just the first lap, but then I held the gap for the next lap, caught her with one lap to go, and pulled ahead of her to finish the 1500m run first, with a time of 5:34, which put me on pace for a sub-6 mile – at the END OF A DECATHLON! The woman I tried pulling along, came in under what she needed to get enough points to break the American Record too – that’s the kind of stellar field of women I was competing against! 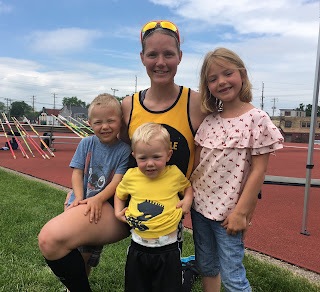 Usually when we get a chance to travel to compete, the kids stay back at home, but this was one of the times when they ALL got to come along. They came out to the track on the second day and got to see me compete in my best events – pole vault and the 1500! It was nice having them be a part of the weekend, and fun hearing, “go, Mommy, go!” I was out of my comfort zone for a lot of it, but I am glad I did it anyway – what an experience!
Posted by Jayme Wyss at 2:04 PM