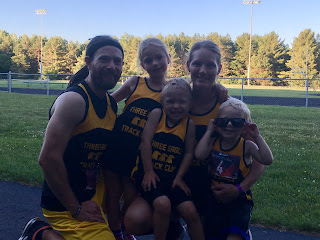 Last night, the Three Eagle Track Club (which I am the Club Director and Head Coach of), hosted it’s first of 2 summer meets. These are super low key and inexpensive meets, but it provides an opportunity to compete locally during the summer (instead of driving 4 or more hours). It's also a chance for our kids to have fun with track too! It was forecasted to be hot, and it didn’t disappoint. I spent the morning dragging everything out. My expectations for my personal performance at these meets are pretty low, as I need to make sure the meet runs smoothly as well, which means setting up, moving, and clearing hurdles, and also chasing after our own kids. There were only 4 of us vaulting, and as much as I encourage the crew to get started, it never seems to actually start until I return after the hurdle races (and the 50m, as all 3 kiddos ran that).  I cleared 10-6 and 11 on my first attempt, and 11-6 on my second attempt, but I felt like I was way over it. Definitely getting consistent with that 11-6 bar this year!
My legs honestly felt terrible, but after the big clearance over 11-6, I wanted to go straight to 12’ instead of messing around with anything else. After all, that’s what I was really after. I had so much adrenaline pumping that as I went back on the runway, I said to a fellow vaulter, “Can you film this? Because I’m going to make it.” At that point, there wasn’t room for any doubt. This was happening. First attempt – CLEARED IT! It’s been 9 years and 3 kids since I first set the goal of 12’, and I finally did it. And I still have 3 competitions left to the season! I have things to keep working on (like my weak take-off and getting off the pole sooner), but I think that’s also the exciting part – that I made the height with so much room for improvement.
What’s it like to accomplish a 9 year goal? Absolutely surreal. TWELVE FEET– that’s legit!