I was given the challenge of 50x50 on 1’ sprints this past summer from a former swimmer.  I’ve been working on building up to it since September when I was doing 12x50 on 1:30.  Comparatively, that now sounds like a cinch, though it was challenging enough in itself, as it is all-out sprints (go ahead and try it yourself).  My times would average 33-35 seconds with nearly a minute of recovery.  Then I worked up to 2x10 on 1:30.  Next I worked on dropping my interval time from 1:30 to 1:20, then 1:15, 1:10, 1:05, and finally one minute.  Getting to 2x10 on 1’ (leave on the minute mark every time) obviously took the first couple of months, then I added at least 2 to the set every week, keeping it as 2 sets until the day I did 26 straight through.  There hits a point at which you’d rather just keep going than to have to start over with your counting. 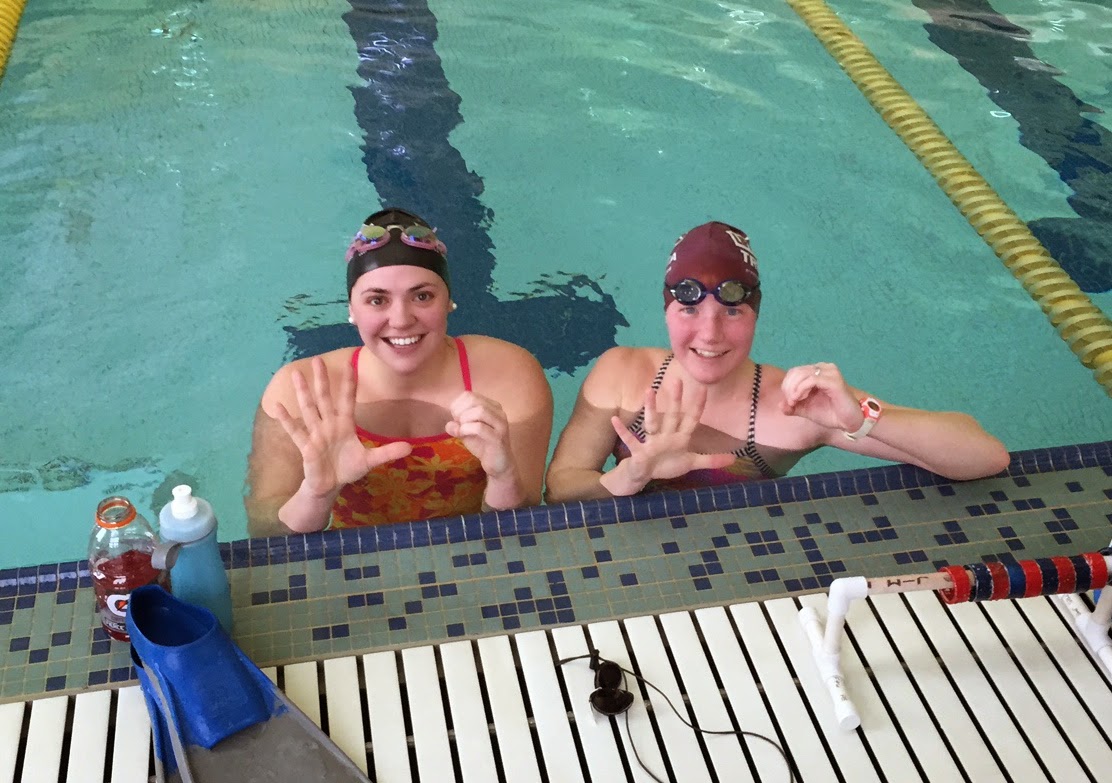 I estimated that I would complete the 50x50 during week 38 of pregnancy if I increased by 2 every week.  Even with holidays throwing off my normal week’s schedule, I made sure I got my 50’s in, and a few weeks I even increased by 3, which has made me able to complete it 4 weeks earlier than I originally anticipated – at 34.5 weeks of pregnancy (one week shy of 8 months)!  After spending 5 months working on this, I’m ecstatic to say I’M DONE – I DID IT!
Fortunately, for my final 3 weeks I had company in the pool for the sets of 46, 48, and 50.  And as long as my swim buddy could stick it out for the duration of the set, I didn’t care if they adapted it, took some easy, took some off, or wore fins for some of it.  I should also add that this was done in an 84-degree pool, which is extremely warm for any type of intense sets of swimming.  It’s the type of temperature where you feel you are sweating in the water and your face gets hot.  Even when I got up to 50 sprints, I still aimed to hit as close to 37 seconds as I could for each one.
I was impressed with my partners for the final sets.  My set of 46 was done with the company of a former volleyball player of mine, who had only swum once since she was in swim club in 4th grade.  I had her mix up what she was doing (descend 1-3, 4th was choice swim, and 5th was off), and after the first couple round of 5 she put on some fins and was golden for the rest.  My aquatic director swam with me for the sets of 48 and 50 – a former swimmer, who is fast, but was not currently accustomed to this type of training and didn’t have the endurance built up.  She suffered through the first session with me, and she came ready to rock for the final session, pushing hard, only taking every 11th off – very impressive!  In her words, “Mom’s rule.”
Before I started this challenge, I thought I would be capable of it, but I also don’t think I realized just how tough it would be either.  I’m glad I took on the challenge, and I’m also glad it’s over.  When I had hit 26 in a row that first time, I thought “Wow! That was a lot!”  Then I realized it was only about half the total amount I needed to do.  Reality check in lane 1.
There is a lot of satisfaction in conquering a challenge, or succeeding with a big undertaking, for the first time.  Challenges need to be tough, but also attainable if we keep working towards it over time.  It keeps motivation alive, but you’ll need your own determination to stick with it.  There will be suffering in the journey, but the end reward and satisfaction is worth the pain.  Keep challenging yourself, and you’ll keep realizing you are capable of far more than you dreamed possible.
Posted by Jayme Wyss at 11:36 AM